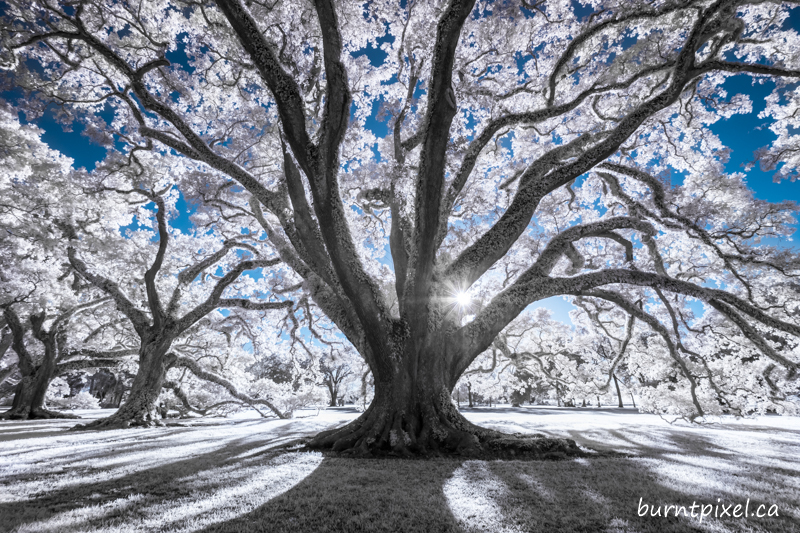 We decided to get out of Ottawa in December to go somewhere warm. The flights to Cuba were a bit too expensive near Christmas time and other places were too far to fly for a short trip. Hence, New Orleans, but it wasn’t as warm as I thought it would be. The high temperatures were around 13-17 Celsius (about 55-63 Fahrenheit), so keep this in mind if you’re planning a trip. Still better than -25C in Ottawa though! I had been there before in late February and it was a nice temperature. Avoid the muggy summer.

We were there for a week and it was barely enough time and we didn’t get a chance to see much outside the city or get to some of the restaurants we had on our list. I would recommend at least a week. Unless you like travelling at a crazy pace, but that’s up to you.

The French Quarter – Kind of like the Las Vegas section, but the northeast corner provides a quieter and less touristy experience.

The Garden District – A lot of mansions and an interesting cemetery.

The CBD (Central Business District) – This was where we stayed, just to the west of the French Quarter; a good base for walking into the French Quarter and also exploring the art galleries in the neighbourhood.

Magazine Street – Not quite a city area, but it’s big; miles of cool shops and restaurants.

Algiers – Across the Mississippi, worth exploring but nothing you can’t find on the “main” side of the river.

This is one of the highlights in New Orleans, so make sure you take advantage of it while you’re there! Do your research, check some top ten restaurant lists online and check reviews on google maps.

Crescent City Cooks! This is a cooking school at 201 Chartres, right in the French Quarter. We paid $30 each for a 2.5 hour cooking demonstration and four course meal, and it was the best food we had during the trip.

Congregation coffee had some of the best coffee we’ve had…ever.

A non-recommendation – Mother’s is pretty famous but the portions were super small for the price.

Keep bakeries in mind, there are some cool donut shops (District Donuts on Magazine Street!) and French bakeries.

Pharmacy Museum: You wouldn’t think so, but the one hour tour at the Pharmacy Museum in the French Quarter was one of the highlights of the trip. The information about 19th century health care was shocking, but the best part was the speaker; super funny and engaging. It was worth taking the tour just for the comedic delivery alone.

Shotgun Houses: New Orleans is famous for houses called “shotgun houses” (so named because there are no hallways, just room to room connections, and it’s said that you could fire a shotgun in the front and it would come out the back). Areas where you can find good groupings of them are: North corner of the French Quarter, Faubourg Marigny, and Algiers, and more. Mansions can be found in the Garden District and on Esplanade street.

Music: Not technically a site, more of an experience, but it’s something not to miss. Head over to Frenchman Street and pretty much any bar will have an amazing band. We saw the Jazz Vipers at the Spotted Cat (still there since my first trip in 2004!) and also Bon Bon Vivant at the d.b.a., an amazing band. If you’re out late you would want to take a taxi home. There are other venues too and lots of great musicians in the city so do some research.

Museums: There are lots around but we didn’t get to too many. The Ogden Museum has all Louisiana artists (if I recall correctly) and they have a free wine/cheese night one day a week (I wasn’t feeling well so we didn’t make it, just passing the info along). The Voodoo Museum in the French Quarter was pretty cool but very cramped.

Cemeteries: They are above ground here due to the water table being very high; when there was flooding the buried bodies would be floating down the street, so they started the above ground system. St. Louis is apparently in a pretty dangerous area. The one in the Garden District has a lot of character and is safe. If you want to see where the rich people are buried, with huge mausoleums and sculptures, head over to the Metairie cemeteries.

Voodoo: There’s a museum as mentioned above, but also some historic sites you can research and visit.

Swamps: Book a tour from the city or take a rental car. Lots of atmospheric Spanish Moss hanging from the trees, alligators, and lots of birds.

Plantations: Not a very nice part of history, but these old mansions are mainly museums now and it’s worth learning about this dark chapter of the U.S. If you’re into photography, there are usually a lot of old oak trees on the properties (Oak Alley is famous for a long row of them leading up to the house). Check the schedule before you go if you want to make sure you have enough time at the site; many companies try to combine them with swamp tours and give you little time at the plantations.

Out of town: There are lots of small towns outside the city, in Cajun country. Lots of good restaurants, festivals, shopping, etc.

Other stuff: You can search out celebrity houses, movie sites, see the haunted mansion (Lalaurie), take a haunted walking tour, get off beaten trail, head to the Ponchatrain bridge and see what’s on the other side, check out some real estate ads to see what the houses look like on the inside.

The giant oak trees are amazing, try to get to an area with some old ones. Also, they look amazing in infrared. Try an IR filter or bring your IR converted camera with you.

The old shotgun houses are very photogenic. They’re most atmospheric at night; bring a tripod and some friends for safety. If that doesn’t work, an early morning outing for photos is safe and a nice relaxing experience with no one walking into your shots.

Safety: It’s a bit of a concern, mainly at night. My guidebook had lots of warnings. When I asked at the front desk they said you’ll be ok pretty much anywhere in the daytime. I would recommend being in a group if you’re walking around at night, avoid obviously questionable areas (and ask around for where they are too) and have taxi phone numbers saved in your phone (great if you’re leaving a restaurant at night)

Cajun vs Creole: Cajun is the local vernacular for Acadians; French people from the east coast of Canada who settled outside New Orleans. Creole is people with African/Haitian ancestry who settled in New Orleans. Apparently the food styles are different and you shouldn’t be fooled by restaurants advertising Cajun food; do some research.

Tours: Do your research and check online for coupons, you don’t want to pay $90 for a swamp tour when you could have paid $60 for the exact same thing. That being said, competition keeps prices fairly similar. Check reviews (sometimes the $90 might be worth it) and avoid the touts in the French Quarter. If person approaches you in the French Quarter for a walking tour, ask them why you should take their tour instead of the other ones; they might give you a discount.

Transportation: it’s pretty easy to get around by bus and trolley, and taxi of course. If you want to get outside the city a bit you could rent a car for a few days.

Mardi Gras: Just my personal opinion, but I would avoid Mardi Gras unless you’re really into partying or don’t mind being uncomfortable in order to cross something off your bucket list; higher prices for everything, jostling crowds, harder to get into restaurants, drunk people everywhere, etc.

Gators: If you go in the winter you might not see any alligators on the swamp tours.

Beignets: They’re pretty much great wherever you go, but if you need the famous ones from Café du Monde and don’t want to stand in the crazy line, go to the outlet mall, there’s one in there.