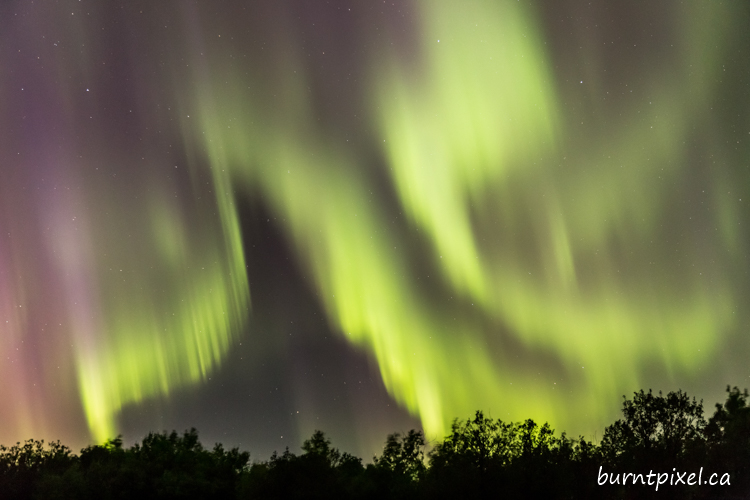 Photographing the northern lights (also called the Aurora Borealis) can be pretty tricky because a number of factors have to align; they need to be pretty strong that day, you need to know about it, the skies have to be clear, you need to be able to go somewhere dark…and hopefully you don’t have to work the next day. The northern lights rarely respect a person’s work schedule and seem to always be happening on the wrong night. But it’s worth making the effort to get out there because people seem to really like aurora photos more than anything else, and the time spent shooting slowly in a peaceful environment can be relaxing. Not to mention that seeing the northern light is a phenomenal thing to experience!

Before I get into things I’ll mention a safety note: if you are going to go out wandering around in dark rural places alone make sure to always tell someone where you’re going and when you should be back.

Anyway, now that that’s done, here are the forecast websites that I usually use…This one is good for shorter term forecasts of about three days:

This one can be used for longer term searching and it even has a 28 day forecast link on the right side of the page:

Make sure you get to a nice dark area, away from large population centres and away from any random lights. I’ve had someone tell me that you need to go at least an hour away from the nearest town, but this isn’t always easy for people to do due to other commitments. Also, if the aurora are really strong that day you might even be able to see them from the middle of your city or town. Another tip, if you’re driving away from light pollution and aren’t sure which way to go, north is always a good option; they’re called the norther lights for a reason.

Regarding the best time of night, I find that the lights are best around midnight or 1am. This can vary though, as can the strength of the lights throughout the night. If you see a nice display and then things calm down and you’re about to pack up to go home, you can stay for another hour or two if you’re awake enough and you might get another show.

Weather is pretty self-explanatory; you want a nice clear night, so check the forecast before you head out. If there are a few clouds it might be ok as they may create some nice streaking patterns in the sky during the long shutter speeds. Keep an eye on the moon’s stage as a full moon might affect how strong the lights look in your photos. But, if you’re including something in the scene, the moon can help to light it up a bit.

You may want to bring a chair or some coffee. Also, don’t forget warm clothes as even in the summer time the nights can be cool and you’re not really moving around much so you can easily get cold. You may also want to bring a friend, not only for safety but also to have someone to chat with. They can also help with lighting if you’re trying something creative.

Make sure you have some sort of foreground interest, either a tree silhouette, a lake reflection, an old barn, etc. Even some trees at the bottom of the frame can help. Try to make an exceptional and interesting image rather than just pointing your camera straight up at the lights. There are lots of those shots already. But pay particular attention to getting your focus right (see the discussion below). And, if you’re trying to create a scene with lots of depth of field (distance) in it, the big apertures required at night might make it hard to get sharpness from near to far. If you’re into exposure blending, you can do a focus stack where you focus at different points in the scene and then combine the shots into one shot with much more depth of field than a single image.

This leads me to light painting. You may want to bring a flashlight or an external flash that you can set-off handheld. I’ve found that I like using the flash because it can give nice even light as compared to the flashlight, where you move it around an hope you haven’t missed any spots or over-lit a certain area. You can even have the flash in the frame pointing back at the camera for a starburst effect (either by remote controlling it or by running into the frame yourself) as in the shot below.

On a side note, I haven’t done this yet, but timelapse videos of the lights look really amazing. Keep in mind that these can take a long time and you’ll probably want two cameras so you can keep shooting stills with one of them. I know that the frame rate is important for timelapses, but you’ll have to look up a tutorial online to learn more. Some cameras have the mode built in while you’ll have to use software to create the video if you don’t have it in camera.

You’ll usually want to use your largest aperture and set the focus to infinity. But as discussed above, you can play around with the aperture if you need more depth of field depending on your foreground element. Keep in mind that a lens’ maximum aperture is not usually the sharpest, but it’s a trade-off between that and being able to keep your ISO as low as possible to avoid excessive “noise” (which was called grain in film) in the image.

Be sure you’re shooting in RAW so you can get the best possible file to work with and so that you can change your white balance while editing just in case the lights are too green or yellow-ish.

Speaking of ISO, I’ve gotten away with 6400 but I try to keep it to 3200 or less if possible. And I’m using a full frame camera which will have less noise at high ISO’s than smaller sensor cameras. But the smaller sensors have the benefit of more depth of field than a full frame sensor at the same aperture. So there are pros and cons to both.

You’ll have to play with the ISO and the shutter speed; if you use too long of a shutter speed you’ll just get a green hazy mess because the lights are usually moving around. A faster shot will get more defined lights. But if they’re not moving much, you can try a longer shot with a lower ISO to get a nice clean photo with less noise. Also keep in mind that when you use a long shutter speed the stars might blur a bit because they’re also slowly moving. You can follow the Rule of 500 which says that you divide 500 by your focal length and that will give you the longest exposure you can do before the stars start to blur. For example, if you’re shooting at 50mm you can have a 10 second shutter speed before the stars start to blur. With a wider lens you can have longer exposures.

Focusing is tough at night. If you’re focusing on infinity, you may need to use a flashlight to see the markings on your lens. Don’t make the mistake I did on my first time out; I thought that anything past the infinity symbol would be good but all my shots were out of focus. You need to line up with the symbol or the little straight line marker beside the symbol. If you have a lens that stops at infinity that’s great and I’m not sure why more lenses aren’t made that way. If you have a foreground element you can shine your flashlight on it and probably use the camera’s autofocus. Lastly, I’ll mention that a good technique is to zoom in on a bright star on your camera’s LCD screen on the back; just focus manually until it looks sharp.

As usual, if you have any questions or feel I’ve missed something please send me an email at theburntpixel@yahoo.ca.

I post to the blog about once a month, so if you want to get an alert when there’s a new post just scroll to the bottom of the page and click the Follow button.